Sometimes life gets in the way of blogging; at least that’s what I’m blaming my eight month, unplanned hiatus on.  It couldn’t be laziness or my incredibly short attention span that’s kept me away from sharing my life on WordPress for the past three-quarters of a year.  Since a picture is worth a thousand words, making a mere word is just worth a word, I thought I’d combine the two to let you know what I’ve been up to.

November:  I went through quite a little art phase that began in November and is still going on.  I collage. I paint. I shop at Michael’s.  I make art, not great art, but I think that people at Michael’s probably think I’m Picasso as much as I’m in there!

December:  In December, my husband made one of my wildest dreams come true!  It involved a bus, the hubs and another man who I hope to one day make my second brother-husband.  Minds out of gutters, dear readers!  My husband took me to Manhattan to see Hugh Jackman on Broadway.  Our seats were close enough for me to see the sweat on his well-chiseled brow.  The whole trip was one of the best times I’ve ever had. 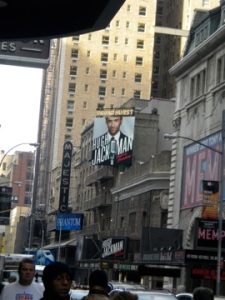 Hooray! There’s the Broadhurst! I’m coming for you, Hugh!

Right before going in. Oh how I wish I’d had the balls to sneak a forbidden photo, or two, inside the theatre, but I know I’m the type who would get caught!

Oh, Gawd, look at her posing! She’s a jewel!

*February:  TV goodness continues with the premier of National Geographic’s Doomsday Preppers.  If this show doesn’t help you get ready for December 2012, nothing will.

Thanks for helping me prepare, dudes! They’ll always be a spot for you in the Sprinkles’ bomb shelter! 🙂

March: I got my first, and only, tattoo.  My oldest daughter designed it and got the exact same one on her bicep.  My youngest daughter wants to eventually get it.  She’s still a little bit unsure about the pain aspect of being tattooed.  The three birds on the branch represent my lovely daughters and me, and the bird above them represents my mother watching over us.  March was the 28 year anniversary of her death.

My healing tattoo. How tough is that?

*April:  Celebrating my 48th birthday in April paled in comparison to the mystical wonder of the premier of TLC’s My Big Fat American Gypsy Wedding.  This show is especially near and dear to my heart because much of it was filmed just 20 minutes away  from my house!!!  I’ve actually seen the following people in my local Michael’s!

Meet Nettie and her younger sister, Mellie. These girls know how to make bling bras, keep one hell of a clean house, and fight like they’ve got nothing to lose!

This fight is taking place outside of the exact same courthouse that I got married in. Too bad it wasn’t on the same day. I would have been a big help to Mellie!

May: We took our annual beach trip to Nags Head, NC.  While there we endured tropical depression Beryl, ate tons of glorious crustaceans, and my husband plucked a glass lizard out of our pool filter!  Yikes!

Behold my mighty husband holding a beautiful glass lizard! He didn’t even hesitate before picking it up! What a man!

June:  Welcome to now!  I’m chilling with the cats and blogging to you.  (Actually, I’m chilling and they’re staring at me.  It’s pretty creepy.) 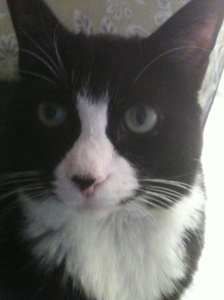 Are you almost done blogging? I have needs!

*I do other things besides watch TV.  No, seriously, I do!

What have all of you been up to lately?

Day # 6 Question: Something I want to do in my lifetime but I already know I won’t be able to is…

Be positive, you must!

Well this question is a little bitch, isn’t it? Thanks blogger gods! Way to try to make a normally positive human being think negatively! Well, I’m not going to play your nasty game of pessimism. I have goals; tangible, reachable, fabulous goals and I refuse to shoot any of them down in this insignificant blog! However, apart from my goals of one day publishing the great American novel, of living in a house that is actually larger than 1,100 square feet, and of being Freshly Pressed, I have a few desires that are most likely moot.

1. I will probably never be a guest on the Oprah show, but this is only because her last season is nearly over and the guest roster is already filled.

2. Chances are I’ll never make mad, passionate love to Hugh Jackman, but not because he won’t want to when at last we meet, but because we both value the institution of marriage.

3. The odds are pretty grim that I’ll be chosen as a Real Housewife of Orange County, New York  , Atlanta, or New Jersey, only because I’m not planning on moving to any of those locals anytime soon. (Plus, I don’t think that even on my worst PMS day that I could be as mean as those old slags are!)

4. My silly dream of spending a day as my cat in a sort of Freaky Friday scenario seems pretty hopeless. This doesn’t mean that I won’t try to squeeze a day in here and there where I do nothing but eat, sleep and poop.

Friend: Hey Sprinkles, did you catch last season of America’s Got Talent?

Me: Oh, that drivel? No, I was WAY too busy unicycling across the United States!

See how cool that sounds?

I’ll also never be able to pee in a coke bottle (unless they make the opening larger), be a crew member aboard a Space Shuttle mission, take down Osama Bin Laden, or claim that I invented the Snuggie. Do all of these could-have-beens get me down? Nope. I like my life just the way it is. 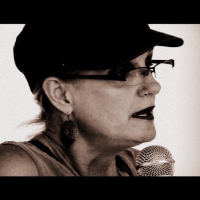