Despite the provocative title, this is not a “pay-per-view” type of story. It is a tale inspired by my blogging buddy, Deborah, at The Monster in Your Closet. After reading about the mischief that her son got into I was mentally catapulted back to a simpler time (actually not simpler at all—my life is pretty damned easy now) when my daughters were younger and only slightly more mischevious!

It was the Sunday after Easter, and my daughters had just arrived home from a visit with their father. I had made the mistake of going on a 20 mile hike the day before, and when my two little sweethearts energetically bounded through the door at 8 a.m. I wanted nothing more than to kiss them hello and sink into a very hot bath to soothe my sore muscles. Anyone who has children knows that a four and six year-olds’ needs must come before their own. They needed to tell me about their adventures with their dad. They needed their hair brushed, and they needed breakfast. So, over toast and scrambled eggs we got caught up. After brushing and ponytailing their silken locks, I told them how sore my muscles were and let them know that I would be soaking in the tub for a bit while they watched a movie. At first they picked out an educational video about sea life that only lasted 30 minutes. I encouraged them to take the sea theme a little further and watch The Little Mermaid since it was nearly an hour longer. While I was drawing my bath, my oldest asked if she could play with the bubbles from her Easter Basket. I gave her permission as long as she played with them over the area rug in the living room and not over the hardwood floors. I then remembered that this was a kid who, at four, had put on her snow boots and masterminded a “blizzard” in the nursery with a very large container of baby powder. I decided to limit her time with the bubbles to five minutes and set the kitchen timer. After she promised to put the bubbles away with the timer “dinged,” I slid into the bath with a good book.

In a few minutes, I predictably did what I always do when conditions are warm and cozy; I drowsily dropped my book to the floor and fell asleep. I know this is not the greatest parenting on Earth, but the apartment was child proofed out the wazoo, and the girls were being babysat by Walt Disney himself. What could go wrong? I awoke to silence. All parents know that silence is a double-edged sword. Silent children could either be angelically napping, or plotting a government takeover. My mind raced from one dreadful scenario to another as I quickly dried off and wrapped myself in my fluffy robe. I called through the bathroom door. “Is everything alright out there, girls?” I heard whispering and scurrying. “Yes, Mama, you can keep taking your bath.” My naturally egocentric children willingly offering me time to myself was not a good sign. They were up to something. I decided to question no further and catch them in the act. I quietly opened the bathroom door and moved stealthily down the hall where I was greeted by my very out of place sofa. On top of the sofa, rolled up like a burrito, was our very large area rug. When small people have move big furniture the result is usually never very good. I braced myself for the worst as I climbed over my misplaced couch, and there in the center of the living room were my two daughters, dressed in last year’s Halloween costumes, barefooted, with soapsuds up to their ankles. “We’re skating, Mama!” my youngest said gleefully as she completed a toddler-styled double axel near the entertainment center. My oldest dressed as Belle, from Beauty and the Beast, and always the negotiator offered, “We made Disney on Ice, from the bubbles. Don’t be mad, Mama, remember how you said you couldn’t afford to take us?” I stood there amazed; both at their ingenuity and at how much liquid one quart of cheap bubbles could produce on a floor. I wasn’t sure whether to whip my slippers off and join them or slide their slippery little bodies to the time-out chair. I decided on neither. The damage was done. The floor was already a sudsy mess and their enjoyment was so pure that I propped myself against the sofa and watched them.

When they began to tire I emptied the linen closet of our towel supply and instructed them on clean up while I sprawled out on the sofa with my book. After every bit of soapy slimy amusement was wiped from the floor, I tutored them in the mopping and drying of it. I then marveled at their strength as they replaced the furniture and the rug. “I think the floor is the cleanest that it’s ever been,” my oldest said confidently. I confirmed that she was probably right, but reminded both of them of the enormous amount of towels that stilled needed to be laundered. I walked with them to the laundry room as they lugged the overflowing basket of towels down the steps. My oldest offered 3 quarters from her piggy bank “since she helped make the mess.” I took them and let her sister gently push them into the machine. When we went back upstairs they didn’t bulk when I asked them to straighten their bedroom while the towels were finishing. Later, as we folded them together on the kitchen table, my oldest asked me if they were in trouble. I told her that I was disappointed that she hadn’t put the bubbles away when the timer chimed, and that she hadn’t been a very good example to her younger sister by disobeying me. Both girls apologized and all was forgiven. “How did it feel to clean up that bubble mess?” I asked them. They both agreed that it was a lot of work. I reminded them that when they make a huge mess they have to use valuable time, which could have been spent playing, to clean it up. My oldest looked at me with a hopeful, impish grin. “Does this mean we can make an ice rink again, if we clean it up?” “Absolutely not!” I said as I scooped them both up in an enormous bear hug, and thankfully my living room was never host to “Disney on Ice” again!

Author’s note: My daughters, who are now, 20 and 23, had a good laugh over this story this morning. Because I was usually not an overly permissive parent, my daughters remember being certain that they were going to be in trouble for their hijinks and were pleasantly surprised that their punishment was merely cleaning up their mess! 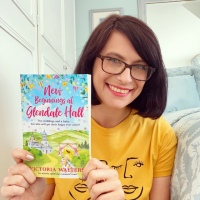